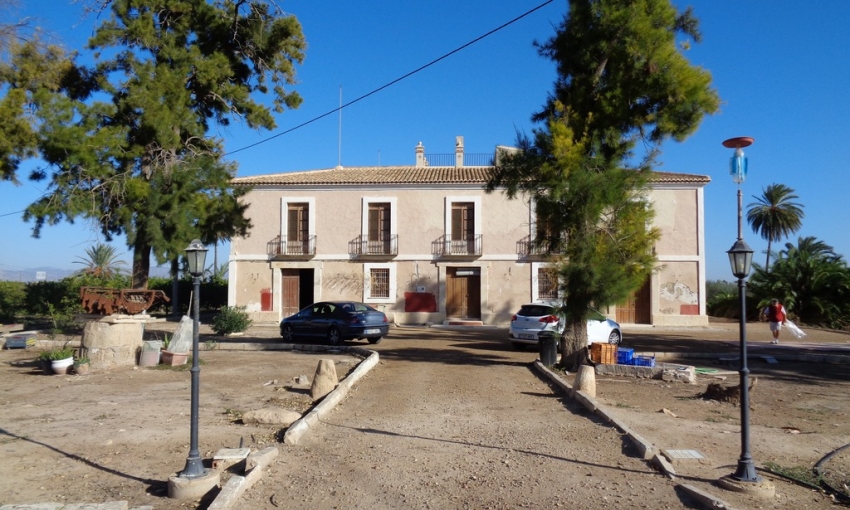 A unique property for sale on the outskirts of Almoradi. The dwelling sits on a 40,000sqm fully-fenced plot which boasts an array of terraces, patios, walkways, fruit trees, plants, plus a handful of wild peacocks and other bird-life. At one time the Finca had it's own vineyard and produced its wine from its in-house wine press. The finca has undergone some restoration work over the years including a new roof and support beams. The property could be used for a variety of uses inducing a small hotel, guesthouse, or even retirement home. The dwelling boasts some 9 bedrooms, 5 bathrooms, 2 kitchens, several reception areas, a self-contained apartment (which could accommodate numerous bedrooms), plus a large central patio which formerly housed horses and livestock. This property really does need to be viewed to be fully appreciated. The town of Almoradi is located in the Southern province of Alicante, close to the mouth of the river Segura. The economy of Almoradi is mainly based on agriculture (vegetables, fruits, oranges and lemons).  The most important monuments in the city are the Ancient Hospital (“Antiguo Hospital”) and the mill of Alfeitamí. The 21st of March 1829 an earthquake took place and destroyed the vast majority of the buildings in Almoradi. This event caused the creation of a new urban plant based on straight lines and wide streets. Almoradi is a developing town which is considered one of the most popular towns in the region of the Vega Baja. Regarding its services and amenities we can highlight the street market every Saturday morning where you can find all type of food, clothes, flowers and much more. The town of Almoradi has recently opened a new sports center which boasts several swimming pools, a restaurant, sports facilities, gym, etc. Furthermore Almoradi offers a medical center, various pharmacies, tapas bars, coffee shops, restaurants, karaokes, an Irish pub and supermarkets such as Mercadona, Hiperber, Mamper and Dia. Almoradi also boasts some places of interest such as the San Andrés Church, the theatre Teatro Cortés, the casino plus the ancient hospital. Regarding the fiestas: During the year Almoradi celebrates several fiestas, for instance the fiestas of the saints San Abdón y Senén which take place the 30th of July and last 10 days. And last but not least, Almoradi is located just a 10 minute drive from the Vega Baja Hospital, around 30 minutes from Alicante airport and 40 minutes from Murcia-San Javier airport.

Send to a friend

No news found in this category.